Battle royale games are all the rage right now, with stalwarts like PUBG and Fortnite being joined by up-and-coming whipper-snappers like Call of Duty: Black Ops 4's Blackout and Respawn's free-to-play Apex Legends. Now, DICE is getting involved with Battlefield V: Firestorm, and the first gameplay has finally been revealed.

In the video above you can see an entire match in Squads mode, culminating in a win for team GameSpot. Matches begin much like other games in the genre, with each player dropping from the sky. They then progress like you'd expect, with squads scavenging for weapons and supplies while battling to be the last team standing.

DICE have certainly put their stamp on the genre, with vehicular combat a much bigger part of Firestorm than similar games' versions of battle royale. Watch the video above to see how matches develop, or watch the one below for the thoughts of our battle royale experts, Dave Jewitt and Will Potter. You can play the mode for yourself when it launches for free on PS4, Xbox One, and PC on March 25.

We enjoyed Battlefield V at launch; critic Michael Higham awarded the game an 8/10 in our Battlefield V review. "The Battlefield series has a winning formula that Battlefield V doesn't deviate far from, at least for now," he wrote. "Conquest and the map roster don't mesh well together, however, Grand Operations--and the other modes within it--steal the show and foster some of the greatest moments the franchise has offered. You might be surprised by the impact of the slight changes made for this entry, especially when you're deep into pushing or defending objectives in Frontlines alongside teammates fulfilling their roles. That's when Battlefield V is at its best."

When Firestorm launches on the 25th of March, the mode will be playable on just one map; HalvÃ¸y, a new map designed specifically for Firestorm. Given the mechanics of battle royale, itâ€™s no surprised that there would need to be a dedicated Battlefield 5 Firestorm map. However, the sheer size of HalvÃ¸y is perhaps even larger than fans expected. The map will be the largest to ever appear in a Battlefield game. In fact, it dwarfs even the largest maps of Battlefield 5.

As an example, DICE released an image on Twitter of HalvÃ¸y with the Hamada map overlaid on top of it. Hamada is one of the largest maps currently in Battlefield 5. Nevertheless, HalvÃ¸y is 10 times larger! â€œEvery clash of arms and armour,â€ Tweeted DICE; â€œevery Objective claimed with your squad, and every only-in-Battlefield moment on Hamada fits into a fraction of HalvÃ¸y.â€ 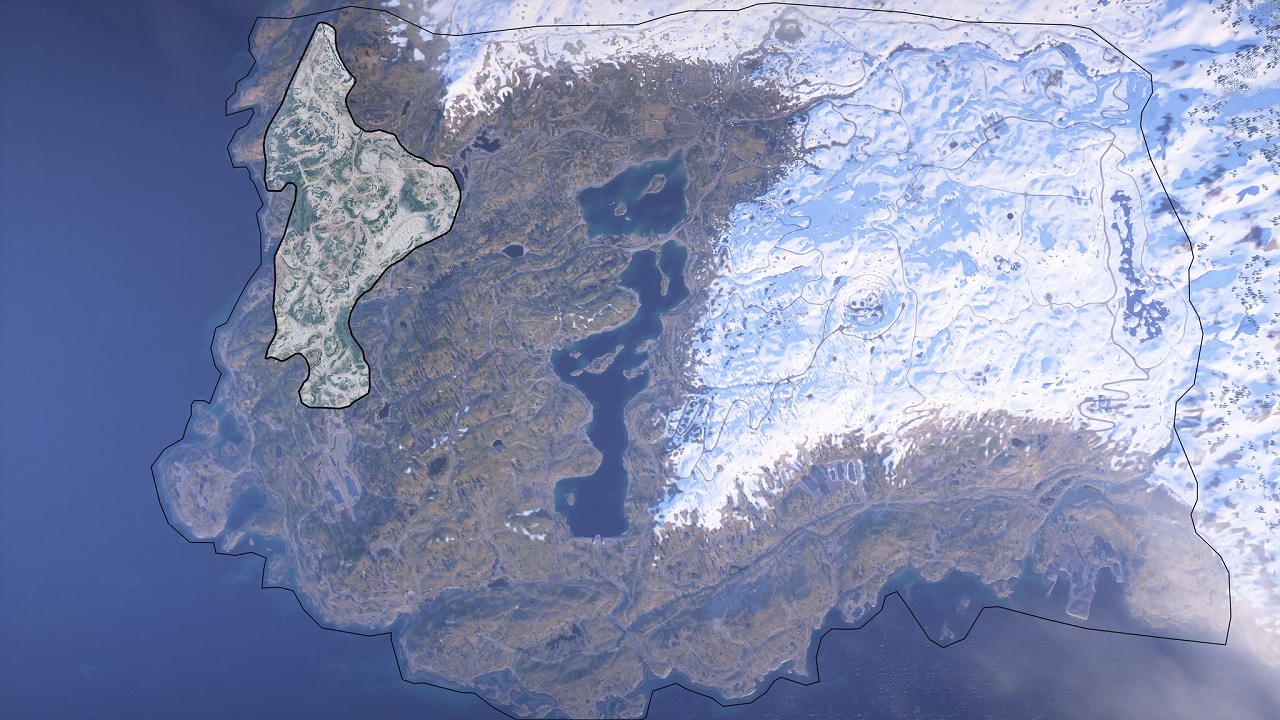 At present, the largest maps in Battlefield 5 are Hamada and Panzerstorm, the latter of which was added post-launch through the Tides of War. After Panzerstorm, HalvÃ¸y will only be the second new map to come to the game since release. However, this certainly isnâ€™t the same as a normal map being released. After all, HalvÃ¸y will support the entirety of the Battlefield 5 Firestorm game mode; likely to be the gameâ€™s biggest post-launch content release yet. It currently unknown whether the map will solely be available for Firestorm, or whether portions of it might be available for other modes. DICE has made cut-down variants of maps available in the past, particularly for use with the Squad Conquest mode, so itâ€™s at least a possibility.